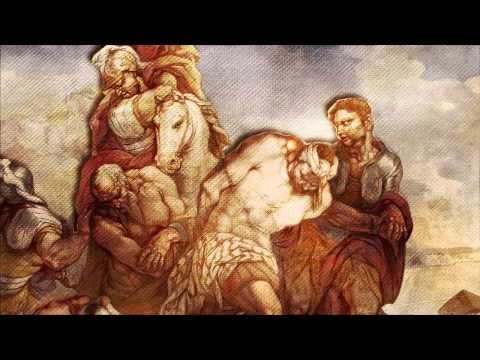 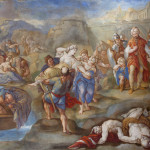 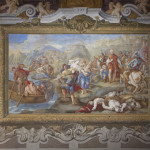 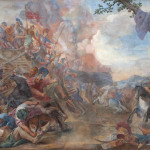 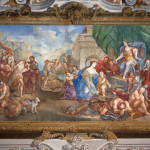 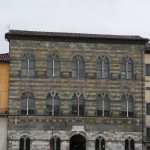 Three tiers of mullioned windows in the Gothic style façade of Palazzo Gambacorti overlook the river Arno. The austere front is decorated with alternate rows of black and white stone.

Built beginning in the second half of the 14ᵗʰ century, over time it has been used as a private dwelling but later was turned into the town council offices, and has undergone considerable internal changes.

The City Council meets on the second floor, in a chamber painted with magnificent scenes celebrating the enterprises of the Pisan Republic on the high seas. The fresco by Giacomo Farelli painted in 1693, from which the room takes its name, describes Pisa’s victory over the Balearic Islands.

Standing with your back to the window, the wall on our right depicts the military excursion against Sardinia, the central one depicts the fall of Jerusalem during the First Crusade and on your left is Pisa’s victory over the Balearic Islands in 1113-1115. This was the city’s last great  military campaign against Islam in the Mediterranean.

A 17ᵗʰ century Pisan might have seen these three  “victories” as  three stages in the city’s glorious expansion: but in fact each of these campaigns was a response to different requirements and motivations. The expulsion of the Saracen king Muğāhid from Sardinia (achieved with the help of Genoa in the early 10ᵗʰ century) was mainly to eliminate a dangerous threat that had established itself in the heart of the Tyrrhenean Sea and on the island of Sardinia, where the network of exchanges and the supply of certain  raw materials were becoming increasingly important.

The fall of Jerusalem was part of a much greater and more complex event:  the First Crusade.  Pisa joined it, probably more for political than for economic reasons. It is no coincidence that the archbishop of  Pisa, Daiberto, was nominated first Patriarch of free Jerusalem.

Then, after the Balearic islands exploit, there began an intense period of expansion for Pisa in the Provencal – Catalan area, a region that at the beginning of the 12th century was changing rapidly and becoming a very important crossroads for trade between the western Mediterranean and northern France.
The choice of target was no coincidence. The Balearic Islands were in a strategic position, midway between Islamic Spain and Christian Europe.  They were well-known, and very attractive to Italian, Provencal and Catalan merchants. The expedition headed by Pisa in 1113 was, in fact, a truly international coalition, blessed by the Pope, that included fleets and armies of the Count of   Barcelona and Provence and numerous cities in the Midi, among which were Arles,  Montpellier, Saint-Gilles, Narbonne, Béziers and  Nîmes.

The enterprise was along, expensive and demanding one, as we know from two poems written at the time in Latin: the Gesta Triumphalia and the Liber Maiorichinus. The fresco does not tell us of the many events, assaults and battles, exhortations, and prayers,  agreements and betrayals that lasted more than two years. It only describes the final act, when two exceptional objects of plunder  pay homage to the city of Pisa (depicted here as a queen on her throne): on the left is Abu Rabi, also known as King Burrabe “captured and in chains, brought prisoner to Pisa  to the glory of Pisans”.  Later, at Easter, he was freed.  At  the feet of the City is a woman in chains with her son. She is the niece of King al-Murtada the Emir mentioned in the inscription in San Sisto and wife of the king. She “with a brother and an infant son, came of her own accord to Pisa with the Pisan army, and here put paganism aside and with her son, took a Christian name”.

The story of the queen of Mallorca, the plunder of war, who was converted to Christianity and whose epitaph is on the Cathedral front, was the last of Pisa’s epic anti-Islamic military ventures.
Pisa was probably at the height of its power in the Mediterranean by mid 12ᵗʰ century, and appears to have realised that the role of protector of Christians in the Mediterranean no longer brought riches; on the contrary, at times it could be more damaging, compared to what could be achieved through diplomacy and trade.

We have yet to discover how the ruling class in Pisa reached this decision. What we do know is that during the third decade of the 12ᵗʰ century the production of poetic praise exalting Pisa as a second Rome or promoting the concept of crusades, suddenly ceased. At the same time, the number of treaties with Islamic kingdoms in the Mediterranean multiplied.

The two frescoes of the enterprises of Sardinia and the Balearic Islands were painted by Giacomo Farelli, a Roman painter, very active in Naples, who was called in 1693 by Cosimo III de’ Medici. The fresco of the capture of Jerusalem is instead attributed to Pier Dandini.