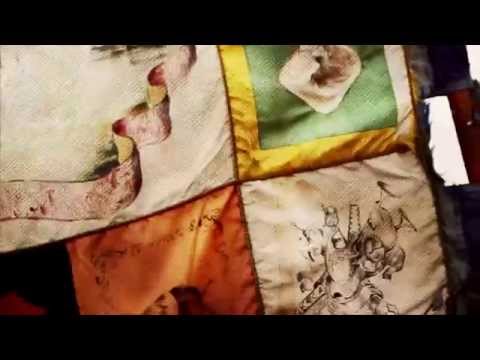 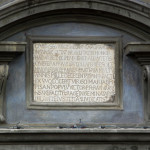 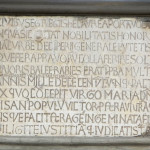 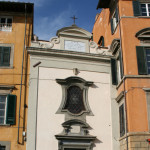 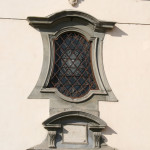 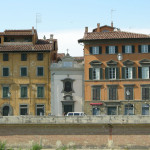 The era of Pisa’s military expeditions came to a close with the 1113-1115 venture, when with other Tuscans, Provencals and Catalans, the city, guided by Pietro, Bishop of Pisa, set out against the Saracens of the Balearic Isles. The city waited anxiously for two years until the triumphal return of the victors after the long drawn-out siege of Mallorca and wanted to commemorate this success too in verses carved in stone;  the inscription now stands above the door of the Galletti Church but was originally above the Porta Aurea, then the main city gate.
In the early 12ᵗʰ century Pisa was very different from now, much smaller, it was not yet the ‘city on the river’ that we know today, spanning two banks joined by the ring of the Lungarnos. It was a ‘city between two rivers’.  The river Auser (no longer existing) enclosed it to the north and the Arno to the south as did a protective wall. The Porta Aurea was here, overlooking the river Arno  that was to become so important during preparations for, and the return from, the expedition to the Balearic Islands.
A poem in dactylic hexameters, the Liber Maiorichinus, written by Enrico, a Canon from Pisa Cathedral who took part in the enterprise, gives us an accurate account of the facts and the key figures.  The author describes the uproar of preparations for the great fleet that set sail in 1113 on August 6th, the feast of St. Sixtus, a day as we have seen,  propitious for Pisa’s victories.

Then finally Pisa resounded with such a deafening noise of axes
That you could not hear even loud thunder.
All the trees and pitch to be had from the woods of Corsica,
is then carried away for their many naval uses,
the forests of Luni are deprived of their best part
and Corvaia is stripped because of the trees felled.
The masts that bear the sails and the wooden part of the hull
That must support them  were supplied by upper Mugello.
All the woods are cut down and what is  felled goes down to the waterways.

And several types of vessel were built:

fit for every sort of task:

Here  horses are led on board, some are useful for loading food supplies
other, huge ones, are for carrying troops,
and the smallest ones serve as tenders and can be used for this.
They can reach the nearby banks with ease,
And carry provisions of water and ferry the men.

Among these are warships – the galleys – ready to fly over the waves on the open sea, propelled by the strength of young oarsmen:

The oarlocks’  leather straps are made for youthful muscles.
One hundred oars propel each of them,
one hundred, in double tiers that soar over the expanse of sea
and,  slicing through the billows, flee and chase
like nimble deer and birds, to overtake in a speedy race
against the birds over the furrows of the sea.

Siege equipment, a speciality for which Pisa was famous throughout the Mediterranean, was also built:

[…] towers, bridges and ladders
That enabled the troops to attack high defensive walls;
[…] siege machines
That could hurl huge boulders against the walls, shaking and destroying houses;
[…] the aggressive ballista, the battering ram and testudo.

Blacksmiths and joiners worked side by side, forging arms and armour and craftsmen were there to decorate them:

Not even the blacksmiths are inactive: all the iron is used up
[…]
Nor are other crafts lacking: colours decorate the arms,
Helmets shine and, the shields and saddles glisten
and the gold laid over them and the jewels sparkle.

Once fitted out, the fleet began the journey down Arno to the river mouth and the open seas, cheered on by those who stayed at home:

Now the solemn feast of St. Sixtus  was dawning
When Pisans every year with votive praise
commemorate their triumphs in war over the African people,
when on the waters of the Arno a numerous fleet began to move
and the vessels all assembled at the narrow mouth
of the muddy river […].

In the meantime, while the ships sail away, on the river banks the mothers weep,
[…];
a father wades up to his chest into the water as clear as glass
and […] with loving words blesses his son.
On the river bank some call on divine aid for their father
And some for their brothers and husbands raise their voices in lamentation.

Two long years of trepidation and waiting passed after their departure  until, with  the happy ending of the venture, the fleet came home up the Arno. The heroes of the Balearic isles disembarked at the Porta Aurea, transformed for the occasion into a triumphal arch for the victors. And Pisa resolved to sing the praises of the entire city, in verses engraved on this plaque that seem to speak directly to the passer-by.  Pisa, a city distinguished by military ventures fought to defend the oppressed, worthy of being considered an honour to the Empire because of its dedication in compelling respect for the rules among populations living together:

This gate is called Golden because only those citizens who have distinguished themselves may pass through it:
As is fitting for the honour due to noble achievements.
Know ye that this city is an ornament to the Empire,
Because it is accustomed to smite the cruel necks of the wicked.
The rabid aggression of the major of the Balearic islands, Mallorca, had  become intolerable:
For this, she and Ibiza – also conquered  –   felt her might.
One thousand one hundred and fifteen years had passed
Since the Virgin Mary conceived God,
when the victorious people of  Pisa overcame both.
And this is attested by the double carnage.

The verses end on a warning note, a quote from the Bible, therefore of divine inspiration:

Place  justice above all other things, ye who have the power to judge peoples.