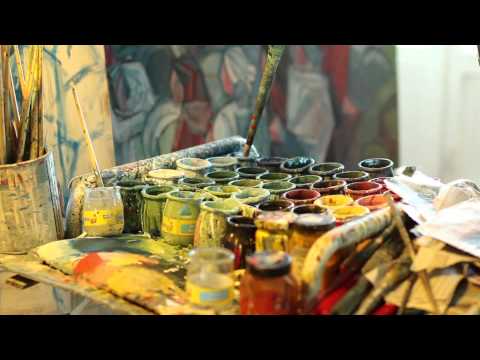 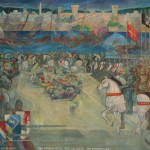 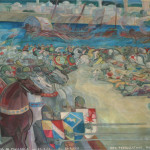 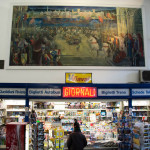 The mural La Battaglia di Mallorca (The Battle of Mallorca) by Daniel Schinasi is in the hall of Pisa Central Station found on the right wall as you enter. On the opposite side there is another famous painting by the same author titled “Omaggio a Galileo Galilei, alle arti, alla tecnica e al lavoro nei campi (The Tribute to Galileo Galilei).

In the Battle of Mallorca (2 meters, 80 cm high and 6 meters wide) the founder of Neofuturism celebrated in 1991 not only an ancient glory of the city (the conquest of the Balearic Islands in 1115), but also his personal condemnation of the war between the peoples.

Daniel Schinasi was born in 1933 in Alexandria (Egypt) from a family of Sephardic origin of Leghorn. Coming to Italy in 1956 as a refugee, he moved to Livorno, where he began to develop a geometric style, which became the base of his Manifesto of Neofuturism (1969). As founder and Director of the Accademia Libera d’Arte (Free Art Academy, 1970 – 1990), Schinasi began an intensive mural activity in 1971. He painted several works for the Hippodrome St. Rossore (Pisa), a number of Italian and French railway stations, the Santa Chiara Hospital, the Opera of Tel Aviv, and the Prison of Graz.

His ongoing commitment to the memory for “do not forget,” leads to a strong affinity for  subjects of the Holocaust or concerning the Jewish people.